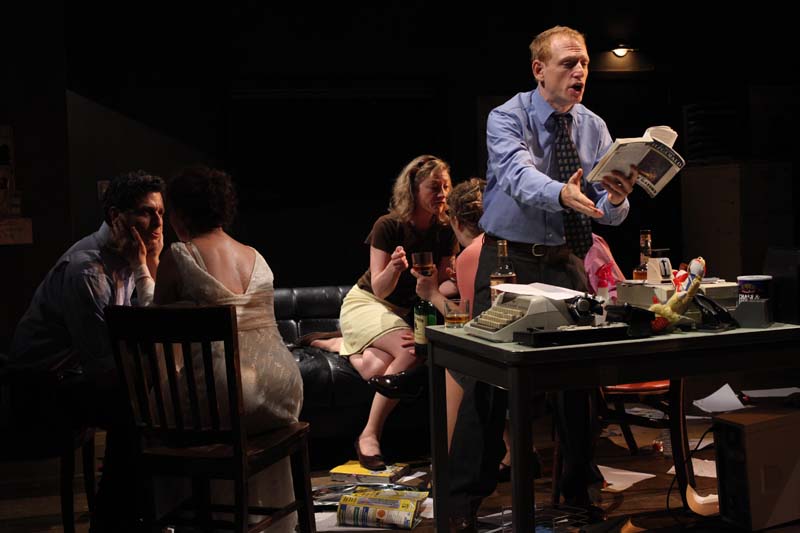 The world is split into two kinds of people: those who love The Great Gatsby and everybody else. Gatsby isn’t a gray-area novel. If you fall for it, you fall hard. Many have. The Modern Library ranks it second only to James Joyce’s Ulysses in the list of 100 Best Novels. Of all time.

When you love a work of literature, it’s difficult to be on the fence about it.

“Are you a Gatsby person?” is somehow a more intimate question than “What are you reading now?”

Two questions often follow that initial identifying one: When did you first read Gatsby, and how many times have you read the book?

I read it as a junior in high school and remember putting my head down on the desk in class from the sheer weight of understanding. I was too young to fully grasp the tragedy of the story – alas, I understand it better now – but I knew I was in the presence of genius with F. Scott Fitzgerald. No language, no structure had moved me as deeply. From this distance, it’s clear my future in the world of words was locked in right there, so certain that I needed to rest my head.

Through the years, I’ve returned to Gatsby regularly and, as with nearly every familiar book, the experience is both the same and new. But never has my perspective been more breathlessly expanded than a few years back when I saw the eight-hour stage adaptation Gatz, created by director John Collins and his creative team at the New York City-based company Elevator Repair Service.

The show opens on an average day when a man arrives at his desk in what looks to be a grubby working-class office. His computer malfunctions, and when he opens a massive Rolodex to call for help, he finds a paperback copy of Gatsby. This is several minutes into the show – and not a word has been spoken until he opens the book and begins reading: “In my younger and more vulnerable years…” The actor – Scott Shepherd – slowly transforms into Nick Carraway. For the next eight hours, he reads the book aloud word-for-word and, as his co-workers arrive, they assume roles and dialogue.

“It’s a fantasy about fully realizing what occurs in your head when you read a book you love,” said John Collins when I spoke to him in 2010. “You project it onto things around you, and you project your world onto the book.”

With Baz Luhrmann directing a new film version of Gatsby, I wondered: Can film draw you to text as powerfully? If anyone can make the opulence of the West and East Eggs come alive, it’s Lurhmann. I confess I may be one of the few who appreciated the 1974 Robert Redford-Mia Farrow flick, but I can’t wait to see Lurhmann’s work.

Still, those eight hours of Gatz continue to resonate. Scott Shepherd – the stage actor who has read the book hundreds of times and has impressively memorized its 49,000 words (you definitely want him as your bar-game partner) – has a unique closeness to The Great Gatsby. What follows is his analysis of Fitzgerald as a writer – as well as a counterpoint reflection by Hillary Casavant, a younger and more vulnerable writer, on her own entry point into the novel.

“It is invariably saddening to look through new eyes at things upon which you have expended your own powers of adjustment,” Nick observes midway through the novel. Gatsby’s story will always be sad, and Fitzgerald will always force us to adjust to see it anew.

I don’t know how many times I’ve read The Great Gatsby. Five hundred? A thousand? Gatz, an eight-hour staging of the unabridged text, in which I play the guy reading the book, has been performed about 200 times, and then you have to multiply by some unknown factor to account for rehearsals, etc. At this point, it’s like asking how many times have I read the Lord’s Prayer or the Pledge of Allegiance. “Reading” isn’t the right verb anymore.

Hunter S. Thompson once typed out the whole novel on his typewriter to find out what writing it might “feel like,” and I can certainly sympathize with this hope of absorbing some of Fitzgerald’s genius through ventriloquism. Gatsby has a way of flattering you with the idea that you could have written something like it yourself.

Unlike Moby Dick, which derives from real whaling experience, or the dark tales of Faulkner, whose obscurant style seems to insist that the world he describes is unknown to you, or Tolkien, who invented entire elfish tongues and runic alphabets, Gatsby supplies no obvious reason why it’s beyond you. Even its purported specificity to the Jazz Age or the American Dream fades upon inspection, and what’s left seems to be a purely invented, rather rudimentary love story elevated to eternal literature by sheer clarity of observation and sterling verbal choices.

You already feel the force of such choices in the first sentence: “In my younger and more vulnerable years my father gave me some advice,” where “vulnerable” stands in for “impressionable,” suggesting with a conspiratorial wink that some sort of permanent injury might have occurred. In school, they told me this was the vertical operation of language: not what transpires horizontally between the words that are there, but the phantom relationship each word maintains with the absent words that might have taken its place.

In performance, I sometimes tried to betray the tiniest hint of surprise at “vulnerable,” hoping to set the audience spinning slot-machine-like through alternatives. In other places, a leading pause was my preferred tactic, possibly justified by a page turn – for example: “… raised his large head and regarded me with two” [page turn] “fine growths of hair which luxuriated in either nostril.”

In showbiz, this sort of trick falls under the rubric of “timing,” and it wouldn’t be amiss to say that Gatsby owes much of its seductive power to Fitzgerald’s impeccable comic timing. That the book is full of punch lines becomes clear when you read it aloud to people.

For a while John Collins, the director of Gatz, accused me of playing for laughs in the novel’s emotional climax, the showdown between Gatsby and Tom at the Plaza hotel. In particular, he wanted to muffle the eruption we were getting here: “At this point Jordan and I tried to go, but Tom and Gatsby insisted with competitive firmness that we remain, as though neither of them had anything to conceal and it would be a privilege to partake vicariously of their emotions.” But this was Fitzgerald’s joke, not mine, and I was powerless to sober it up. The more soberly I delivered it, the bigger the laugh it got. In fact, the only way to kill it was to over-indicate the humor, which I found out the hard way once or twice when I leaned too sardonically into “as if neither of them had anything to conceal.”

“Partake vicariously of their emotions” is a succinct gloss for what we do when we read novels, and that Fitzgerald makes it a joke is part of a general strategy in Gatsby of having it both ways, indulging a sentimental impulse and then undercutting it with a wry observation by his circumspect narrator. You might even say this horizontalizes a vertical operation, putting two options side by side instead of choosing between them. Nick’s last encounter with Gatsby is a telling example, hinting at the author’s ambivalence toward his own creation.

“They’re a rotten crowd,” I shouted across the lawn. “You’re worth the whole damn bunch put together.”

I’ve always been glad I said that. It was the only compliment I ever gave him, because I disapproved of him from beginning to end.

If you memorize the book like I accidentally did, the vertical operation gets literalized, because mistakes take up temporary residence in your mind and are later ousted by superior originals. Indeed, the pleasure produced by these corrections is what causes the involuntary memorization.

Publishing mistakes can provide the same sort of illustration. One well-known erratum was introduced into the book’s celebrated final paragraphs in 1941. The 1925 edition reads: “Gatsby believed in the green light ‒ the orgastic future that year by year recedes before us.” Edmund Wilson emended this to “orgiastic,” and many published versions have since carried this mutation.

But Fitzgerald had already clarified this with his original editor Maxwell Perkins: “Orgastic,” he wrote, in an assertion that describes the gratification in so many of his startling and exuberant choices, “expresses exactly the intended ecstasy.”

Since 2005, actor and writer Scott Shepherd has performed the lines of Nick Carraway in Gatz, a production of the Brooklyn-based Elevator Repair Service. He is also a member of the experimental theater company The Wooster Group, where he stars in the title role of Hamlet.

The summer I read The Great Gatsby, I was in love. A young college student thirsting for literature, I prepared to read one of the greatest stories ever written. I read it. I liked it. And I immediately forgot it. A few details would cling to me: eggs and eyes and a quiet swimming pool. But even as I put the book aside, I suspected that F. Scott Fitzgerald had told me a secret, a truth I couldn’t quite grasp.

Not long ago, my mother brought The Great Gatsby home from the library, a yellowed copy with a woman in moonlit gauze on the cover. She read it and gave it to me.

After a few days I picked up the book, and the more I read, the more I realized I didn’t know the story at all. It tasted as delicious as a new novel, as though the young college student who had read it before was a stranger.

As the story unfolded a second time, I realized Fitzgerald had written a novel so pure and simple and painful that the girl in love that summer couldn’t manage it. Years later, Gatsby was the same Gatsby, Daisy the same Daisy. But I had changed. After experiencing first heartbreak, I could grasp the truths of life and love this book embodies.

The magic of the novel lies in its ability to point a mirror at ourselves, to reflect a piece of our world. With simple prose drenched in subtext, The Great Gatsby reveals a life hidden behind material and gloss. This novel gave me new eyes by peeling back each artificial layer. At the root of the story, these characters are the victims of their own choices, humans like ourselves.

The first time I read it, I thought I was Nick Carraway, a witness to the illusion. But I wasn’t. The love-lost dreamer, the masquerader himself, stared back at me. I was Gatsby.

Opening this book again, a few years older and maybe a bit wiser, I recognized the truth Fitzgerald captured: Life is tragic, and tragically beautiful.