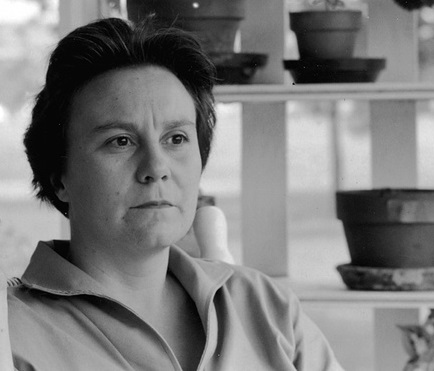 The summer of 2010 marked the 50th anniversary of the publication of To Kill a Mockingbird by Harper Lee. It’s my favorite book, and I’m not alone in my admiration. According to a Slate article, To Kill a Mockingbird is “consistently ranked in reader surveys as the most influential book in Americans’ lives, after, of course, the Bible.”

I first discovered Harper Lee‘s lyrical prose when I was in high school, and I revisit her book often, like an old friend. I usually come away from a rereading with a new insight, a universal truth uncovered from her small corner of Alabama.

As I was writing In Search of Mockingbird, a young-adult novel that tells the story of a girl whose favorite book is To Kill a Mockingbird, I often wondered what it would be like to have Lee for a writing mentor.

Would she be the hand-holding, nurturing type who would critique my work with a feather touch, ever mindful of my fragile ego?

Or would she be the nose-to-the-grindstone type who would be blunt with her criticism and demand hard work? I suspect she’d be the latter, because of her role as editor of her college magazine and her own disciplined work ethic.

But her book is an excellent writing tool in itself. That, combined with what I know of her life, has taught me how to be a better writer. Here are insights on writing that I’ve gleaned from her book and that I’ve found useful in my own writing life:

Take a cue from your personal experiences. Only Lee could have written Mockingbird, set in the sleepy fictional Alabama town of Maycomb, which shares much with Lee’s hometown of Monroeville, where she grew up in the 1930s with deep Southern roots.

Anyone who has visited Monroe County’s Old Courthouse Museum will feel as though they’re likely to see Atticus Finch pacing the front of the room, at this same courthouse where Harper Lee’s father often appeared in court.

The parallels between the book and her life are numerous, from her lawyer father, who served as the model for Atticus, to the eccentric, blond-haired Dill, who resembled her real-life friend Truman Capote.

Other autobiographical roots in the story relate to her own tomboyish childhood, much like Scout’s, and a mysterious neighbor who left presents for the children in a knothole in a tree, much like Boo Radley did.

The trial itself is thought to be loosely based on the Scottsboro trials, in which nine black youths were charged with raping two white women.

Writing is difficult work, and most manuscripts require many revisions. To Kill a Mockingbird started out as a series of short stories that had no unity as a novel. Lee gave up her position at an airline and dedicated two and a half years to revising her novel. She lived a stark existence in a small, cold apartment with a wooden door as her desk.

In a 1964 interview she said, “Writing is a process of self-discipline you must learn before you can call yourself a writer. There are people who write, but I think they’re quite different from people who must write.”

Include an element of surprise. When Atticus takes one difficult shot and kills a rabid dog, Scout and Jem learn that their soft-spoken father, whom they think is too old and has no practical skills, is a deadly marksman, a skill he chooses not to exploit. This single surprising act shows us a great deal about Atticus’ character.

Let your characters grow and change. Scout and Jem are not the same children at the end of the novel as they are at the beginning. After witnessing the trial and their father’s role in it, they have a different perspective on life. They’re also changed by their experiences with the mean-hearted Bob Ewell and the reclusive Boo Radley.

Don’t expect to get rich from your writing. Her advice to writers is “to hope for the best and expect nothing. Then you won’t be disappointed.” She has said that real writers don’t write primarily for recognition or money but know that writing is its own reward.

Be humble. Lee did not flaunt her success; instead, she preferred to let her writing speak for itself. As Miss Maudie says in Mockingbird, “People in their right mind never take pride in their talents.”

Loretta Ellsworth is the author of In Search of Mockingbird.

*This essay originally appeared in the September 2010 issue of The Writer.

Kicking down fences with Margaret Atwood