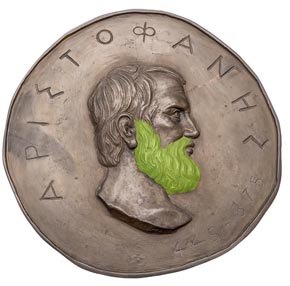 Each winter, I’m part of a group that puts on an arts festival in a university setting. Most of the events are student-driven and showcase considerable undergraduate skill in the visual, performing and literary arts. Additionally, I’m part of a creative team that writes a spoof performance to both highlight student talents and comically entertain audiences. In addition to understanding what goes into a high-level production, the single most important quality for our team is a sense of humor in the writing.

One year we featured an internationally esteemed economist as a world-class conductor of the first movement of Beethoven’s Fifth Symphony. He had never conducted before, but he embraced the role – tuxedo and red carpet included. The chamber music ensemble (well established as a conductorless group) pretended to follow his flailing arms as dancers in drag played out a goofy “mime” narrative about competing for the maestro’s attention. The musical performance was stellar, and the silly skit that accompanied it brought down the house.

This year, we’ve been hard at work on another spoof: Swan Lake: For the Birds! It’s a 15-minute adaptation of Tchaikovsky’s famous ballet featuring the university’s theatrical drag troupe, the student ballet company, a student chamber ensemble and several prestigious professors in lead roles (though not in tights and tutus). Again, the event is student driven and features extraordinary creative talent – but the success depends on the collaboration of the writers on the team, including students, administrators and me.

This year, in one of our team meetings, we shot ideas around the room. For instance: One of our professor-actors is tall and stately, like the prince in the ballet. What would happen if we cast him against type and gave him a sinister role? Why would that be funnier than if we typecast him?

The ideas were sailing, and we gathered the first round of usable moments in that meeting. Over time, we would meet again, rehearse, exchange notes, rehearse more.

The process got me thinking about the history of comedy, and that led me to Harvard professor Bob Scanlan, who teaches a class called “Dramatic Literature from the Greeks to Ibsen.” Instantly, he pointed me toward two heavyweights of early comedy: Aristophanes and Menander.

“Both of them exhibit a pattern of humor that has to do with forbidden satire,” said Scanlan, who is also artistic director of Poets’ Theatre in the Boston area. “That always is based on power reversal. In the case of both of these authors, whoever is in power, they tend to turn the tables on them, which seems to satisfy a deep reflex in any social gathering or community. Comedy always is in the spirit of impudence that is given special permission, but which would normally be punished or suppressed.”

Humor, he added, is a transgressive act because it toys with our agreed-upon experience of convention and normalcy, and unexpectedly turns life as we accept it on end. Even the banana peel is guilty of that. The best sources of comedy in America – the ones that make use of that insult to convention and seek to surprise us – are stand-up routines and Saturday Night Live-like situational humor, he said. It comes down to lèse-majesté – “an offense against the throne” – or some taking down of power in an unexpected way.

Then Scanlan expanded the playing field: “I think deeper humor, better humor, is intentional. When you see people purposefully screwing things up, it makes you laugh. It’s an oppositional defiance. But all humor has a common DNA in that it’s breaking loose out of the straight jacket of convention and proper behavior.”

I recognized these elements in our Swan Lake adaptation: Not only were we re-imagining a beloved script, but our lead performers – powerful academic figures – were allowing us to poke gentle fun at them with both serious dancers (the ballet) and satirical dancers (the drag troupe). The combination would be unexpected for the audience, but we would also be planting jokes, and that’s why we needed writers, editing and test runs.

Even then: How can you assure something is funny?

“A lot of comedy writing necessarily needs to be collaborative in large part because the answer to that question is so hard to pin down,” said Sam Clark, a senior and one of the drag dancers in Swan Lake. “Very often something will be funny if you read it to a room of people, and they laugh or react positively. It’s difficult to pinpoint what precisely makes something funny. A lot of what people find funny is the unexpected, but oftentimes what you most expect – particularly when building up to something that is then fulfilled – can be funny. That’s the tension between the least expected thing being funny and the most expected thing being funny.”

I asked Scanlan what text he might recommend for writers who want to learn to build their humor chops.

“No texts,” he said. “Get on your feet and talking and see if you can be funny. Start unraveling everyday things like dripping faucets and make something out of those.” Then he paused. “The only text I think is really good about comedy and humor is by Henri Bergson, the French philosopher. He wrote about the only intelligent discourse on comedy and laughter that I know of: Le Rire. His theory is that whenever real life is suddenly interrupted by a mechanistic imposition, like the banana peel, it is disruptive and triggers laughter. He calls it ‘le rire mécanique.’ It pounces on you and catches you unexpectedly. That’s why the pratfall is so perfect. Why that makes us laugh? Nobody knows. But Bergson thinks it’s the interruption of things, a subversion of life as it’s proceeding on its own.”