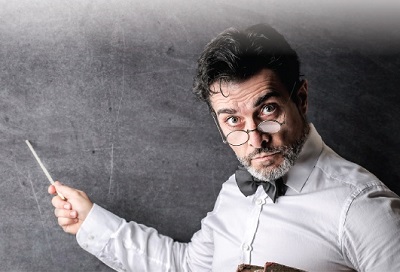 In elementary school, back in the 1950s, we were never given writing assignments, and I never imagined there were any living authors. I pictured a cemetery filled with tombstones of my favorite writers with their last names first, like card catalogs in the library: Baum, L. Frank 1856-1919.

Writing – the pleasure of articulating interior worlds sensed but not seen – was something I did on my own. I was in eighth grade before I got a chance to write a story for school.

My eighth-grade English teacher, Mr. Mortem, was a malevolent-looking man with a low brow and small beady eyes. We joked that he moonlighted as an axe murderer. But he was even scarier as an English teacher. He terrorized us with menacing-sounding exams called “evaluations,” which turned out to be ordinary multiple-choice tests. But he was the first teacher to give us an assignment to write a short story.

“Remember,” Mr. Mortem called as we filed out of class, “no stories from TV!”

I hardly heard him. I was too excited about getting started.

At home that night, I rolled a fresh piece of paper into my typewriter and began a story about a mute boy living in an 18th-century seaport. In the story, the boy discovers a crack in the mast of a great sailing ship docked in the harbor. He tries to warn the townsfolk, but they dismiss him as an idiot. In the end, he steals aboard the majestic ship before it sails, choosing to die rather than live in a world that so completely misunderstands him.

Until then, all I’d written in Mr. Mortem’s class were check-marks on multiple-choice tests. I imagined the look on his face when he discovered I was a brilliant writer.

A few weeks later, Mr. Mortem returned our stories. When he came to my desk, he stopped.

“You didn’t write this,” he said, holding up my work.

“Yes, I did,” I said. But my voice sounded very small, and Mr. Mortem looked big. He also looked like he was enjoying himself.

“I don’t believe you.” His voice was hard, accusing.

The classroom was quiet. Everyone was watching, waiting to see what would happen next. Mr. Mortem leaned over, his eyes boring into mine. “I’m going to keep this story so you won’t try to use it again in high school,” he said.

I couldn’t find the words to explain that I would never “use” a story again when there were so many new ones waiting to be written.

Mr. Mortem grudgingly gave me an “A,” although he didn’t believe I wrote the story about the boy no one believed. Inside, I was seething.

Just wait. Someday I’ll be a real writer. Then you’ll be sorry.

Four years later, on the last day of high school, my chemistry teacher stopped me in the crowded hallway. By this time, my stories, poems and beginnings of bad novels had appeared in the school paper, but I had flunked chemistry class.

To my surprise, Mr. Welch smiled. “I’m not worried about your chemistry grade, Pamela,” he said, “because I know that someday I’m going to have your books on my shelf.”

I was stunned – 1965 had not been a good year; my parents were divorcing and selling our house, and now I had flunked out of Chem II. The fact that my dad was a renowned scientist admired by my teacher didn’t help.

“My life is a failure, as a life,” I wrote to my best friend Debbie, who was away at college, “but as a screwed-up mess, it’s a brilliant success.”

Yet here was Mr. Welch telling me he was going to have my books on his shelf one day.

Twenty-one years later, in the fall of 1986, I walked down the long dirt driveway of the farm where I lived with my husband, past glowing maple trees to the mailbox where I found a large brown envelope from my publisher. I tore it open, my heart pounding. There it was – my first book – a living, palpable object I could hold in my hands, the child of so much heartbreak, despair and love. I couldn’t wait to see it in the bookstores with the other Christmas books for children. But that would come later. At that moment, I just wanted to hug it. And after that, I wanted to call Mr. Arrick, my much-loved creative writing teacher from high school. I told him my news, and we talked for a while. Then I asked him if he remembered Mr. Mortem. The two teachers had taught together in junior high school before Mr. Arrick moved to the high school.

“Sure, I remember Chuck,” he said. “He got drunk and killed himself years ago.”

For a moment I was speechless.

“He killed himself?” I said finally.

“Yeah, he fell down his basement stairs and broke his neck. He was a closet alcoholic, you know.”

I couldn’t believe it. All those years I’d hated him and worked to get even, and he had been dead.

My chemistry teacher had given me the incalculable gift of a generous, unearned faith when he predicted that he would one day have my books on his shelf. But Mr. Mortem had given me a no less potent charm – a gritty determination to prove he was wrong.

I sent the first copy of my book to Mr. Welch, the chemistry teacher, and reminded him of what he had said in the high school hallway in 1965. He wrote back to tell me that he had read my letter in his retirement speech.

Then he went home and put my book on his shelf.

Pamela Jane has written children’s books, including Noelle of the Nutcracker, Little Goblins Ten and Little Elfie One. Her work has appeared in the Philadelphia Inquirer, Antigonish Review and Literary Mama. Her memoir An Incredible Talent for Existing: A Writer’s Story will be published this year.