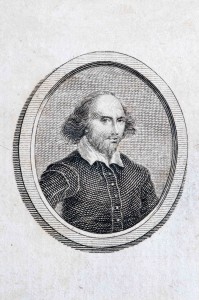 “Honey, sit down and write a story.”

My mother turns on her electric typewriter. It fills her garage office with a warming hum. I’m 9 years old. I’m wearing a latex Ronald Reagan mask and chasing my siblings until they scream. Craving peace, my mother reaches past The Complete Works of William Shakespeare on her shelf. She picks up her copy of the Writer’s Market and thumps it onto the desk.  “When you’re
finished, submit your story to a magazine.”

That first afternoon spent writing, I learn – as my mother had decades before – to consult Shakespeare in the midst of writer’s block. When I stall in my tale about a mentally ill teen who befriends a white tiger, I haul down the mammoth Complete Works and turn to A Midsummer Night’s Dream, the only play I can understand at that young age. Inspired by the quirky characterizations and comic absurdity, I keep writing.

It’s 10 years later. Home from college where I am working on a literature degree, I attend the Ojai Valley Shakespeare Festival with my mother. We sit under the oaks with a picnic basket of pasta salad, crudités and chocolate chip cookies.

“What are you writing these days, honey?” Mom asks.

She sighs. “My psychology master’s thesis.”

At the end of the play, however, her tired expression has vanished. “I’m going home to write,” she says.

I sleep in her guest room. Past midnight, I read Shakespeare’s sonnets and wonder if I’ll ever see my own words in print.

Fast forward a quarter of a century. During this time, my mother and I see Shakespeare in Los Angeles, San Francisco, Madrid. The ritual renews our relationship and reinvigorates our art. We meet annually in Ashland for the Oregon Shakespeare Festival to see plays, go to lectures and browse Bloomsbury Books.

In King Lear, we sit stunned, shaken to tears by powerful performances in the intimate Thomas Theater. My mother hopes to see Richard III. I threaten mutiny; the play puts me to sleep. Instead, we end up at Bloomsbury’s coffeehouse with an actor on a break from performing in Lear. Reluctant to disturb him, we content ourselves with eavesdropping on his conversation with the barista – not about land grabs and murderous power struggles, but about the weather: too hot.

My mother’s novels explore social issues such as the treatment of mentally ill people and anti-Chinese sentiment in the late 1800s. Perhaps this is why she prefers Shakespeare’s tragedies. I’ve graduated from romantic comedies to trickier combinations of humor and pathos in The Taming of the Shrew, The Tempest, Much Ado About Nothing. I adore the repertoire between Beatrice and Benedick, feel innocent Hero’s pain as she hears herself accused of knowing “the heat of a luxurious bed.” 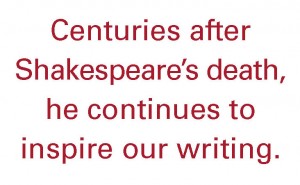 Regardless of what plays we see, after two days in Ashland, my mother and I
return to my house excited to get back to work. In my guest cottage, her light burns past midnight as she writes. I see it from the kitchen table, where I sit working in my notebook.

Centuries after Shakespeare’s death, he continues to inspire our writing, but he also has strengthened our relationship, both as family and as supportive writers. We don’t write in iambic pentameter. We don’t use Elizabethan dialogue, referring to one another as braggarts and milksops. But we thrill to his timeless characters, archetypal plots and imagery that is just beginning to capture the attention of my 7-year-old daughter.

“Want to see Macbeth?” I ask when our local company performs it in our park one sunny August evening.

We find a spot among neighbors’ blankets and dip into a picnic basket of melon balls, cheese cubes and chocolate chip cookies. The three witches appear. “Double, double toil and trouble,” they croak, stirring their cauldron.

My child leans forward. “What’s in the soup?” she cries.

She doesn’t hear the laughter. She is mesmerized by the witches. At home, she runs for her notebook and markers.

Melissa Hart is the author of the memoir Wild Within: How Rescuing Owls Inspired a Family. She teaches at the School of Journalism, University of Oregon.