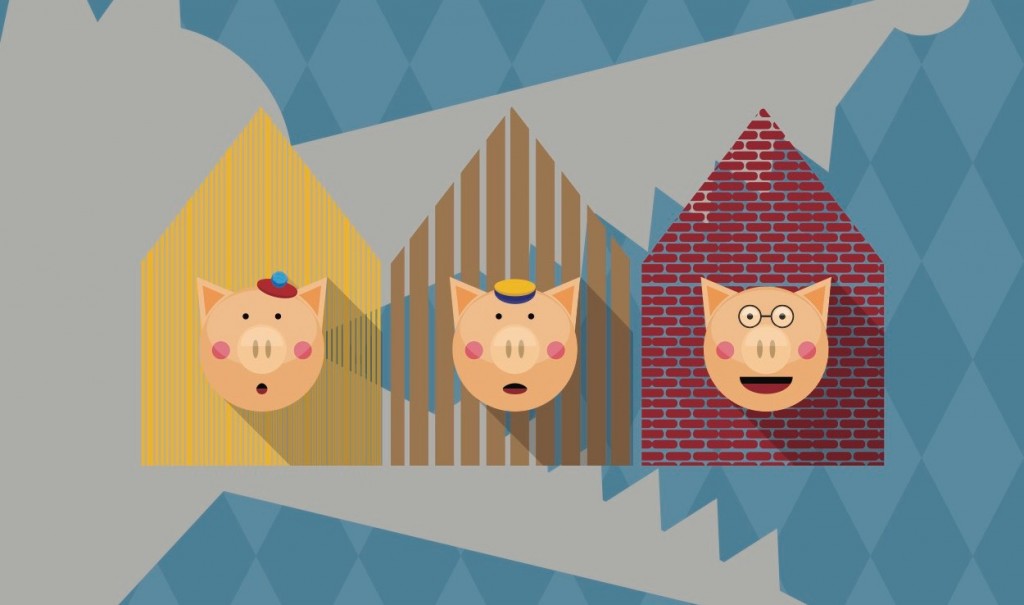 I’ve always been a huge fan of the story The Three Little Pigs.

I’m hardly alone in this, of course. If you were to ask the average person to tell you a story – especially a children’s story – he or she is probably going to think of The Three Little Pigs first. And there’s a reason for that. It has all the key pieces of a good story, which is why it’s so easy to remember. It has:

Because it’s such a solid story, there are so many versions of it out there. A quick search of your favorite bookseller will yield a myriad of traditional versions for you to choose from. You can read the exact same story that has been popular since at least the mid-19th century again and again with your choice of tone. Do you want an ominous version? A whimsical version? A heart-warming version? They’re all out there to choose from, and nearly every approach in between.

In addition, there are a host of newer takes on the story, which employ at least one small twist, if not a completely fresh angle. Most choose to swap out the pigs and the wolf for new characters. Pigs become ninja pigs or fish or aliens or gators or tamales or even little wolves. The wolf becomes a shark or a robot or a big-bottomed boar or a big bad pig. In a particularly funny version by Jon Scieszka, you’re given the wolf’s side of the story. (A must read.)

And that’s writing in a nutshell. This story has been done a thousand times. Everyone’s heard it. Everyone knows roughly how it’s going to end. And yet there’s plenty of room for new takes on The Three Little Pigs. If The Three Little Pigs can be made fresh and appealing over and over again, how much more room is there for the boilerplate story in your genre to be retold anew thanks to your vision, your voice?

Our pigs’ tale has even more to teach us about writing, however. For this lesson, we must go into the story itself.

I have someone in my life who is often highly critical of me and tends to belittle me in small and big ways. Unfortunately, I can’t just walk away from this person. Also? They mean well. They really do. No two-dimensional villains here. Trying to figure out how exactly to live with this person in my life while simultaneously forging my own path and generally enjoying my life has been a struggle.

Recently, I was thinking about an impending visit with this person. Experience told me that it was likely to be an uncomfortable visit, especially given the current political climate. As writers are prone to do, I had a flash of an imagined moment. In this scene in my mind, this person was antagonizing and criticizing me in increasingly confrontational ways. Ordinarily, this would lead me to either engage and fight back (especially in my younger years) or to defuse and appease and avoid (for peace’s sake since my kids have arrived). But in this imagined moment, I saw myself calmly listening to this person’s bluster, and when I tired of it, I simply said, “You can huff and puff all you want, but you’re not going to blow this house down.”

I realized that all the work that I had been putting into nurturing my own vision of what I want my life to be like, what I want to be like, was finally paying off in ways I hadn’t realized. Perhaps I was living in emotional houses made of straw or sticks in my younger days. Or maybe I wasn’t. Maybe I was always building my brick house, and I didn’t know it. It just took a while to stack the bricks and finish the roof.

In the past, I believed that all those coping strategies I’d tried over the years had been unproductive and futile. “Epic fails,” as my kids would say. But maybe what I didn’t know is that all those efforts were bricks. And without realizing it, I had been using them to build myself a solid little home for my spirit. I’d created a metaphorical place where I was both comfortable and safe to pursue my own dreams and happiness. All while that big bad wolf was huffing and puffing and taking little nibbles.

And here’s the thing: Your inner critic is just like this person in my life. The truth is, while that inner critic is often quite nasty and wolf-like, it’s just doing its thing, doing what it believes it was put here to do (like, say, a wolf just grabbing some dinner). What makes it infinitely worse, though, is that your inner critic thinks it’s just looking out for you. It believes it has your best interests at heart. But you must not listen to it. And, unfortunately, try as you may, you will never be able to oust this inner critic from your story. It has a permanent residency in your creative life, like it or not. This is one big bad wolf that will never run off into the sunset with a sore bottom or be boiled up in a pot.

But you, by getting up every day (or every other weekend or for one glorious blitz for two weeks in the summer – whenever your writing happens for you) and nurturing your creativity, by putting words down on the page, you are stacking another brick. You build a little more of your tiny sanctuary.

Inside that sturdy little cottage (or cabin or loft or midcentury minimalist mansion on a hill overlooking the ocean), you can create all you want, safe from that big bad wolf, the inner critic. And in this safe place, you can stand inside and say, “You can huff and puff all you want. You’re not going to blow this little house down.” Because you will know that inside this space, built with your efforts in the face of constant opposition, your whole self is free to do your work. Counterintuitively, you will work to offer a piece of yourself to the world, like a gift. And as Emerson tell us, “Rings and other jewels are not gifts, but apologies for gifts. The only gift is a portion of thyself.”

The rest of us need you to live happily ever after, bringing forth the words that only you can give the world. Because no matter how many times we’ve read similar stories, yours is new. Yours is the one we’ve been waiting for.

—H. Dair Brown (hdairbrown.com) is a short story writer and freelancer who’s probably right this very minute watching her kid’s ballgame, with a book, notebook, and pen at hand. She is seeking representation for her novel-in-stories, Molly Bright.