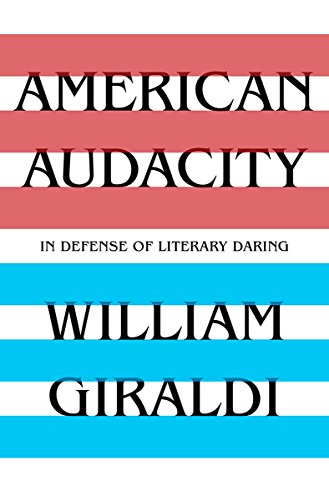 “America began in audacity,” writes novelist and memoirist William Giraldi in the introduction to his latest book,  American Audacity: In Defense of Literary Daring. “We’re a union of escapees toiling toward our own authenticity. Reach back before the audacity of Southern secession, of the westward pioneers, of Lewis and Clark, of the Revolution, of the Declaration, and look to the audacity of those first settlers, storming this already occupied Jeshimon, believing their inscrutable Lord had willed it, wanted it for them, an overdue deliverance in this New World.”

Audacity, Giraldi argues, is a quintessentially American trait, one that has been (and continues to be) rewarded in our culture. As a literary critic, he fixes his eye on bold American authors unafraid to be audacious in their prose: James Baldwin, Harper Lee, Herman Melville, Cynthia Ozick. The resulting collection is “a volume of essays and reviews concerned with American authors and with those American subjects I am interested in as an American author myself,” writes Giraldi. (Note: Many of the essays in his collection have been previously published, but some have been lengthened or shortened for the resulting book. )

Publishers Weekly calls Giraldi’s collection both “a wide-ranging and provocative collection of essays” and a “graceful case for the value of good writing.”

“All American writers must, I think, at one point or another, pen their ‘American’ book. This is mine,” concludes Giraldi.