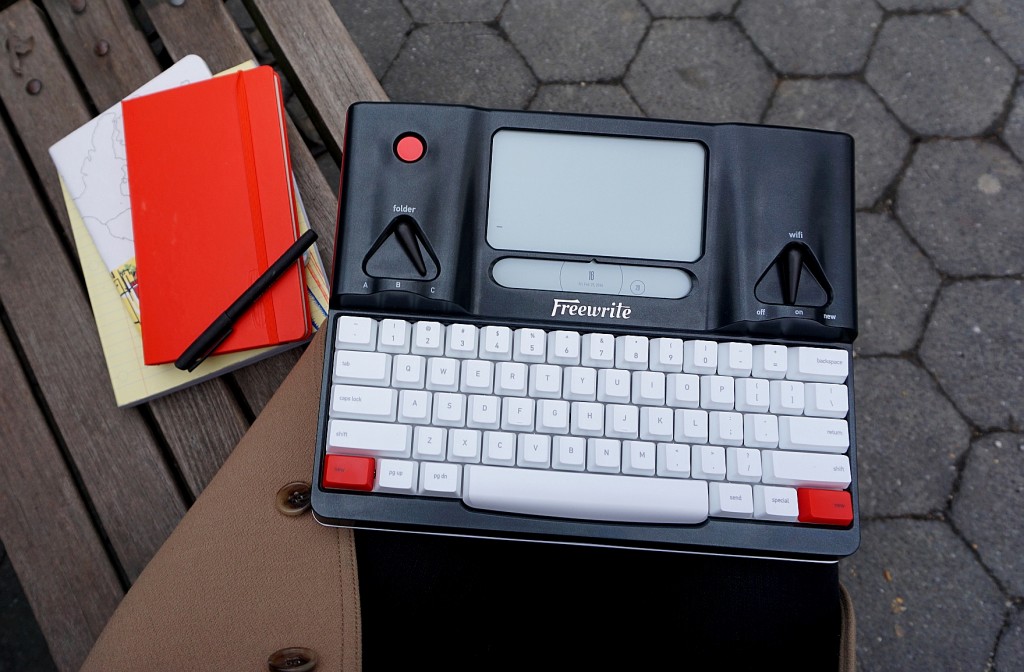 Writers of a certain age remember life before the internet – the hum of the electric typewriter, the thwack of metal type bars against a rubber roller, the astringent smell of Liquid Paper (and the mess). Most fondly, perhaps, we remember the ability to concentrate on one thing only – the page in front of us – without the temptation to check Facebook or post a new cat photo to Instagram or lose ourselves in the endless website browsing we’re convinced is “research.”

Adam Leeb and Patrick Paul, co-founders of the tech company Astrohaus, have found a way to take writers back in time to those blissful hours of single-minded focus on a manuscript. They’ve created Freewrite, billed as the world’s first smart typewriter. It’s a portable distraction-free writing tool that doesn’t allow for Internet browsing, but has WiFi capability and automatically uploads all of your drafts to the Cloud, synching them with Dropbox, Evernote, and/or Google Drive.

“I’ve always been interested in writing and super-interested in productivity,” Leeb says. He and Paul dreamed up the device while sitting across from one another in a co-working space in Detroit, Michigan. Paul mentioned the prevalence of distraction-free software on the web – apps like SelfControl and OmmWriter, which allow users to block the most tempting websites for a specific period of time. 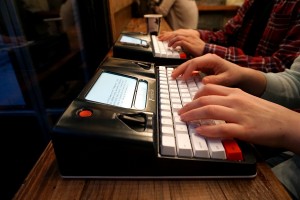 “It started this whole conversation about the writing process,” Leeb says. “We looked at this concept of distraction-free writing and turned it into a hardware product.”

The four-pound, sleek black-and-white typewriter offers internal capability for over a million pages, a battery that lasts three to four weeks at a time, a full-sized mechanical keyboard, and a lit electronic paper screen that resembles ordinary ink on paper and allows for enhanced readability when a writer is working, say, on a beach towel in the sun.

Search the web, and you’ll find photos of Freewrite users typing away on park benches, in sunny fields, and at street-side cafes. Leeb says that younger writers, in particular, gravitate toward the device with its dearth of notifications and beeps and inbox alerts – those audio and visual distractions they’ve grown up with their entire life.

“Some people, non-writers, are quick to think Freewrite is just another hipster toy,” Leeb says. “The people who use it are writers open-minded enough to try it, people who’ve thought about their writing process deeply.”

Tim Moynihan, writing for Wired magazine, calls himself a “bona fide Freewrite fanboy. It doesn’t make the words coming out of my brain any better,” he notes, “but it makes them far more pleasurable to write.”

Feeling stuck at your desk and enslaved to all of your computer’s bells and whistles? This just may be the device you’ve been waiting for.

“People forget that we have a lot more control over our surroundings than we think,” Leeb says. “Having that ability to leave your office and take Freewrite outside is so liberating.”

—Contributing editor Melissa Hart is the author of Avenging the Owl (Sky Pony, 2016) and Wild Within: How Rescuing Owls Inspired a Family (Lyons, 2014). Web: melissahart.com.