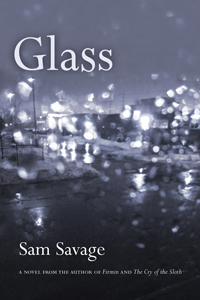 Glass is the first of Sam Savage’s novels that I’ve had the pleasure to read. But I understand that it possesses certain bonds with the author’s previous books: As in Firmin: Adventures of a Metropolitan Lowlife (2006), the reader will devote more attention than usual to a rat (yes, I said a rat), and as in The Cry of the Sloth (2009), writers and varieties of writerly experience play a significant role.

When Glass opens, protagonist Edna is thinking. We soon surmise that nearly all of Edna’s thoughts find their way through her fingertips to her typewriter keys and onto the innumerable sheets of paper that litter her apartment. (Edna may visit her local Starbucks, but even if she could afford a laptop, one cannot imagine her joining other writers at work there.)

“The mystery is why all of a sudden I decided to take it up again, take up typing again after so much time without it,” Edna reflects. “One day I am staring out the window or quietly eating oatmeal at my table or, as I mentioned, weeping, and the next day I am typing. I will not say merrily typing or even typing away, but typing nonetheless, accurately, and at a good pace, considering.”

If a solution to this mystery exists, perhaps it rests in an invitation extended from her late husband (Clarence)’s publisher, which is planning to reissue Clarence’s novel, The Forest at Night, and asks if Edna might care to write a short preface. In response, Edna informs the publisher’s representative that “I could not (I underlined not) write a short preface but that I would consider writing a long introduction or even, I said, a separate book (I underlinedseparate twice), and while there would be a lot about Clarence in it, it would not be just about him but also about my life before and after, as one could not pretend to understand Clarence without that.”

Whatever Edna’s inspiration may be, Glass lives up to this statement. That is to say, there is “a lot about Clarence in it,” though very little one might imagine a publisher wishing to use as a preface. For example, early on, Edna observes that “the sentences in The Forest at Nightare not nearly as awful as they became later.” Elsewhere, she opines: “Even in the fullness of his power, Clarence was not an imaginative writer.” And a line such as “In my opinion, when they reissue The Forest at Night no one will even notice,” surely would not appear in any published preface to the reissued book.

Equally, Edna’s pages are most certainly not “just about” her author husband. They convey much about Edna’s “life before,” a life of material privilege and parental neglect. And in depicting Edna’s present—including her role tending (or failing to tend to) a traveling neighbor’s fish, plants and pet rat—they show her life “after” Clarence as well.

On a craft level, Glass leaves several strong impressions, at least some of which other fiction writers and students of fiction writing may find instructive. For instance, the narrative unfolds entirely in Edna’s first-person voice. It’s no easy trick to sustain a first-person voice for an entire novel. For some readers, Edna’s self-described mental “dithering” may prove too trying. But for others, Savage’s skill in sustaining the reader’s attention through 200 pages of apparent stream-of-consciousness may be exemplary.

Another observation: Readers will not find much white space in Glass. Savage writes block paragraphs throughout, not infrequently block paragraphs that last several pages apiece. This, too, can be a risky authorial choice. But for the most part, and for the patient reader, Savage makes it work.

In fact, Savage does more than make it work. In a novel that essentially lacks a plot, he nonetheless creates one of the most intriguing stories—and one of the most vivid characters—that this reader has encountered this year.

Erika Dreifus, a contributing editor for The Writer, is the author of Quiet Americans: Stories.