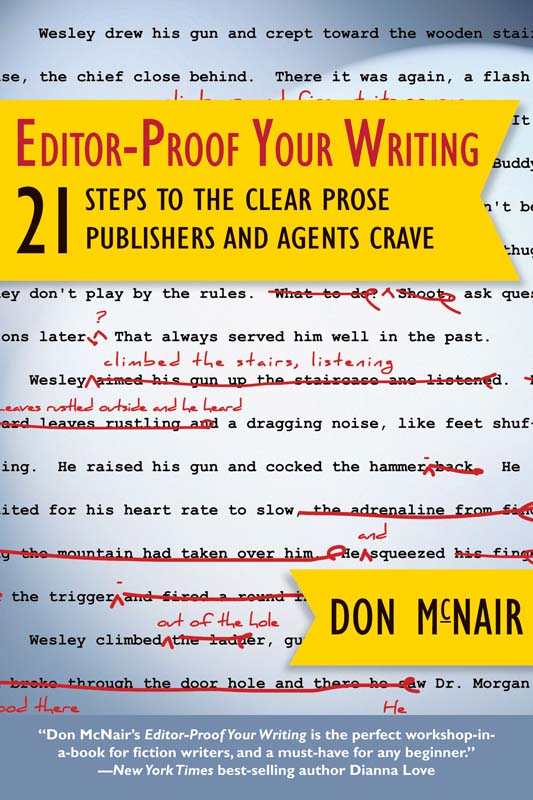 Don McNair has a simple mission: To help fiction writers learn how to better edit their work.

McNair can speak authoritatively on the subject. He spent his working life editing magazines and then producing public-relations materials for the international firm Burson-Marsteller before starting his own marketing communications company, McNair Marketing.

He has written and placed hundreds of trade magazine articles and three non-fiction how-to books. He has written six novels: two young-adult novels (Attack of the Killer Prom Dresses and The Long Hunter), three romantic suspense novels (Mystery on Firefly Knob, Mystery at Magnolia Mansion and Waiting for Backup!), and a romantic comedy (BJ, Milo, and the Hairdo from Heck).

He now concentrates on editing novels for others and teaches two online editing classes at McNairEdits.com.

Most recently, McNair has written another book. Editor-Proof Your Writing: 21 Steps to the Clear Prose Publishers and Agents Crave.

The veteran editor is on a crusade against what he dubs “foggy writing,” which includes weak verb forms, author intrusions, redundancies, meaningless phrases, passive-voice sentences and misused and overused words, that will lead most publishers and agents to toss manuscripts onto the return pile.

The biggest cause of foggy writing: “Most unpublished writers know they need to edit, but they don’t know what they’re supposed to do,” McNair, 75, says from his home in Foley, Ala. “About 99 percent of the time, you need to take things away to make the manuscript clearer. Most people don’t understand that, and so they add words, which makes it worse.”

McNair’s book has been several decades in the making. It originated on a flight from Chicago to Atlanta in the mid-1970s. He was trying to read a paperback when examples of bad writing began to leap out at him.

“I was intrigued that editing problems kept repeating themselves,” he says. “A pattern emerged, and I became excited. Had I discovered the writer’s Rosetta stone?”

Since then, McNair has been cataloguing writing problems he discovers in published books and unpublished manuscripts. At first, it was an exercise to help him improve as an editor and writer. Eventually, he used what he learned in teaching his online editing classes.

That’s when he decided to publish the 21 steps that offer writers a better chance of getting a book deal. “The editor is going to see the problems and not read any further,” McNair says. “They won’t read on and see the value of the ideas themselves. That’s where editing makes the difference.”

If many writing guides are akin to geography books full of maps, Editor-Proof Your Writing is more like a GPS, leading its readers straight from problems to solutions.

McNair’s book is very much a hands-on manual. After reading each chapter, which is stuffed with bad writing and corrected examples, the reader is encouraged first to fix some sample sentences, then to apply what he or she has learned to the first chapter of his or her own manuscript. By running through all 21 steps, writers can become aware of their own writing problems, avoid them in the future and apply the lessons learned to the rest of their manuscript.

“Those problems are actually tips of bad-writing icebergs, and eliminating them resolves otherwise complicated editing problems,” he says.

The fault doesn’t lie entirely with writers, as McNair’s experiment with published material proved. Some editors aren’t fit to be gatekeepers, especially in this era of electronic publishing. “I don’t want to throw mud on anybody’s wall, but some editors don’t know how to edit,” McNair says.

He pointed to the example of his brother’s editor, who shuffled chunks of text around trying to change the point of view. McNair ended up editing that book himself.

McNair’s stance is that all writers need to be edited. “Regular publishers at least have an editor to look at a manuscript, which keeps the field clean of a lot of bad writing,” says McNair. “Self-published material often doesn’t get edited. Readers will spot problems and write bad reviews, so those authors are just hurting themselves.”

For those who feel they can’t afford a professional editor, there are always critique partners or groups, although he says that those alternatives can’t catch everything. And there’s also his book, written to heighten a writer’s awareness of common mistakes and their cures.

Dale McGarrigle is a freelance writer and editor who lives in Maine. He has reviewed books, music, theater and pop culture.

Many newbies use strange fonts, single spacing, and other visual tricks, unknowingly guaranteeing that editors will spot them as neophytes. So your first assignment is to present your work in a professional manner. While there are slight variations, the format I describe below is universally accepted.

First, copy your manuscript’s first chapter into a new file called “First Chapter” (or whatever you want to call it) and format it as follows:

Set the margins at one inch, all around.

Select Times New Roman (or Century) as your font.

Using your word processor’s numbering command, insert “1” in the upper right corner of your first page. The rest of the pages will be automatically numbered.

Select “header,” and type in your last name, a forward slash, and all or part of your title flush left. If you want, select boldface for both this and the page number (which is now on the same line, at the right margin).

Type “Chapter 1” over the body copy, center it, and boldface it.

Double space after “Chapter 1” and begin to enter your body copy in regular type (not boldface or italic).

Do these instructions seem fussy? Trust me, they’re not! A manuscript boasting clean, competent formatting assures an editor that at the very least the writer knows the basics about how the publishing industry works.

Now, let’s create a title page for your manuscript. Put your name, address, phone number, and email address on separate, single-spaced lines in the upper left corner of a blank page, much as you would list your contact information in a business letter. Then drop one-third down the page, set your auto-indentation to “center,” and type your manuscript’s title in all caps. Type your word count in the upper right-hand corner, also in caps, like this: WORD COUNT 78,500.