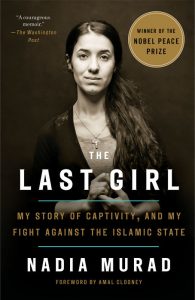 The Last Girl: My Story of Captivity, and My Fight Against the Islamic State, Nadia Murad (Penguin Random House, 2017).

Murad, who is Yazidi, won the Nobel Peace Prize in 2018 for her work on behalf of sexual violence survivors around the world. At 21, she was kidnapped from her home village in Iran by Islamic terrorists, who then sold her into slavery. She escaped with the help of a local family and has since gone on to found Nadia’s Initiative, an organization dedicated to “ending the use of women and girls as weapons of war.” Homa says, “[The book is] about ISIS’ brutalities when they attacked the Yazidi Kurds. But it’s really not just about the brutality for me. It’s all about the resilience that the women showed and how they fought, if even when they knew 100% they’re going to fail.” 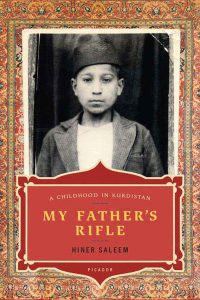 My Father’s Rifle: A Childhood in Kurdistan, Hiner Saleem (Picador, 2006).

This autobiographical novella (autofiction) by an Iranian filmmaker is equal parts “heart of darkness and heart of light,” says Homa. “It’s really in looking pain in the eyes that we can overcome pain. People look at people like me, [and] they’re like, ‘Oh, her story is going to be too brutal. I’m not even going to open my heart to it.’ But what happens is with the depth of grief that humans experience comes the depth of soul…the thing about My Father’s Rifle is Azad is a kid who is very young when his relatives are murdered and brutalized by the Iraqi government. But there is also so much more to that story. He enjoys the pigeons that his cousin trains on his rooftop and all the pomegranate trees that his mother and grandmother planted and things like that. It’s just a good, well-rounded representation of life.” 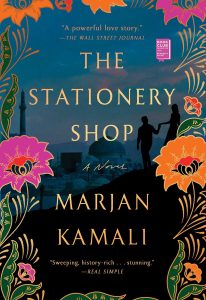 This love story, which begins in 1950s Iran, is soon to be turned into a series for HBO. A friendly stationery shop owner introduces two young people who eventually become lovers, but their affair is cut short when a coup d’état changes Iran entirely. “It’s one of those books that you can’t easily put down, but it is also historical and political. It’s also the story of a family. There are just so many layers to it, and it’s just really well-written.” Homa also notes that the book illustrates well how “politics seeps into family and how people’s idea of ‘I’m going to support nationalism,’ or ‘I’m going to support equity and equality and leftist ideas’ can bring a family together or totally shatter that family.” 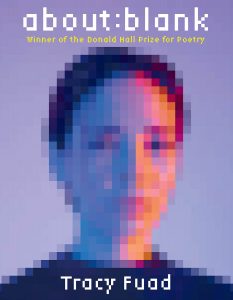 Homa’s poetry pick is also the 2020 winner of the Donald Hall Prize. Fuad is “a queer Kurdish American feminist and poet,” says Homa, and her work “deals with a vast array of topics. She talks about what it’s like to be in diaspora with a Kurdish heritage while being raised in a completely American culture and looking white. She talks about technology; she talks about survival and survivor’s guilt.” Homa notes that poetry is a key part of the Kurdish identity, a tool for survival. “For me to see a modern version of it, a version written by a Kurdish American…it’s a beautiful mix. And the fact that it jumps from, you know, a line about an app on your phone to the horrors of Iran and Iraq. That juxtaposition to me was interesting.” 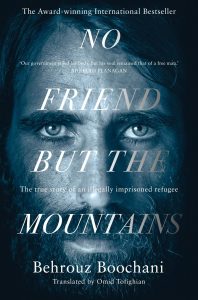 No Friends But the Mountains, Behrouz Boochani (Picador, 2018).

Kurdish-Iranian journalist Boochani went into hiding for three months and then escaped to Indonesia after the Islamic Revolutionary Guard Corps attacked his newspaper’s offices. From there, Boochani and 60 other asylum seekers attempted an ocean crossing to Australia, only to be arrested by the Australian government and detained on Manus Island, where the government held single male refugees until the facility’s closing in 2017. The book, told alternately in prose and in verse, was tapped out on a mobile phone in Farsi and then translated; it later won Australia’s highest honor for literary works, the Victorian Prize for Literature. “I could completely relate to his story,” says Homa. “I am a migrant myself, so I know how we are perceived: as invasive people, as unwanted people, as unwelcome people. Just to be in that place where the whole world turns it back on you, then becoming this voice for all the refugees and immigrants, then becoming this huge literary figure. I guess it goes back to this idea: ‘What you are now within this time period won’t determine who you were and who you will be.’”