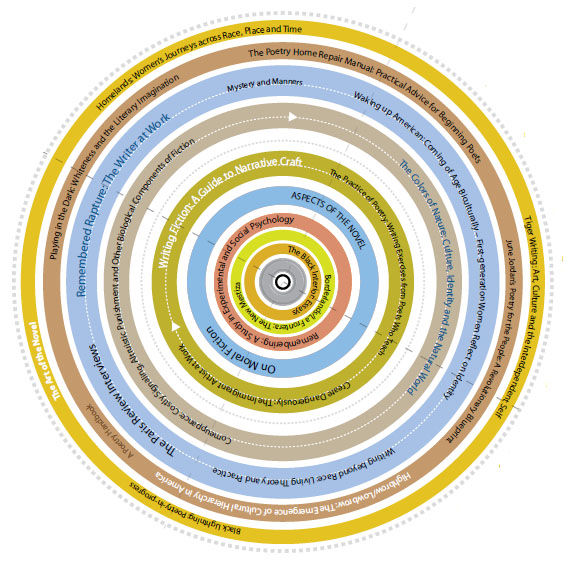 Last spring, novelist Gish Jen published her first book of nonfiction, a fascinating book called Tiger Writing: Art, Culture, and the Interdependent Self. In it, Jen explores how the intersection of culture, of East and West, informs the stories she tells, indeed, how culture informs the stories all writers tell.

It’s no secret the mainstream literary landscape – including lists of “must read” or “best books” about writing – does not reflect the diversity of the larger world. VIDA counts documenting the marginalization of women writers and research from journalist Roxane Gay reporting even grimmer numbers for writers of color have roundly illustrated the reality. In “Broader, Better Literary Conversations,” published by The Nation this fall, Gay noted, “[The] numbers suggest, quite plainly, that the people shaping the literary conversation are not reading diversely. If they are reading diversely, it’s a well-kept secret.”

Scanning “best of” lists of books about writing – where the technical, pedagogical, theoretical and critical appear to happily cohabitate – the landscape appears similarly distributed. This is a loss for writers.

Reading books about writing – gleaning tips on plot or characterization, tackling writers’-block-busting exercises – can inspire breakthroughs and growth. Reading books about writing can expand writerly horizons and, other than David Gilmor, the novelist and professor who announced last fall he teaches only books written by “serious, heterosexual guys,” what writer doesn’t want that? As novelist Edwidge Danticat, whose Create Dangerously: The Immigrant Artist at Work is inspiring, said in an interview last spring, “[T]he more ‘coverage’ you get, the fuller your understanding.” Reading about writing can also ease the isolation of the writer’s life. Sitting down with another writer, in person or on the page, often helps writers feel less alone, because all writers, even those whose prose appears effortless, struggle to answer hard questions. This evergreen fact is reassuring, even hopeful.

Seeking diversity in books about writing

But what if a writer doesn’t find herself or himself reflected in books and discussions about writing art and craft? What if a writer’s particular questions are not addressed or even noticed? Last summer in New Mexico, novelist David Haynes launched the inaugural Kimbilio retreat as a weeklong workshop and community “committed to developing, empowering and sustaining African American fiction writers and their stories.” “As it turns out,” he says, “the general creative writing orthodoxy is presented by folks who have no reason to think about cultural specificities. It puts them in a position that allows them to say with a certain amount of legitimacy: ‘My job here is to teach you about craft, and to not have to address these other issues.’ It’s terribly easy to erase textures and questions that are entirely outside of your ken.”

Sonya Larson, program director at Grub Street, the Boston-based independent writing center, says the organization for years based the content of its courses on genre or craft rather than the identity of the writer, believing that “good writing is good writing” and that identity politics did not belong in the creative-writing classroom. “We are starting to question the limits of that philosophy,” she says. “If you’re from a minority culture, your identity ­– or perceived identity – is often inextricable from how the majority culture interprets your work. Minority writers often find themselves facing artistic decisions others don’t have to: Should I italicize Spanish words? Will readers think my characters are black because I am black? How do I indicate that they’re black, or should I even bother? Do I explain what happens at a Chinese funeral?

“The cultural identity of minority writers is sometimes linked to craft,” says Larson, “at least in America and at this point in history. We’re finding lively, honest debate is helpful.”

At an event in October 2013, honest, lively debate is exactly what Grub Street’s panelists Pablo Medina, Regie Gibson, Jennifer De Leon, Adam Stumacher and Celeste Ng and a full-house audience had – in person and in the tweetosphere.

A sample of the comments: “There is no white section in the book store.” “Why do we let majority writers speak for everyone when minority writers can only speak for their ascribed groups?” “Italicizing brings foreignness and disrupts the flow of language to the point where it isn’t language anymore.” “All writing is ethnic writing in the same way all food is ethnic food. Well, except for maybe McDonald’s.” “The great thing about books is being blinded. With no image to trigger our subconscious, we are in the character’s body.” “I don’t know if I’m an ethnic writer. That seems to be a term that comes from the outside.”

In Roxane Gay’s words, creating better, broader literary conversations can be messy. She is quick to add: “It’s OK, because after the mess we’ll have something productive.” The start of a more expansive list of books about writing, for instance. On that front, says David Fenza, poet and executive director of the Association of Writers & Writer Programs, one thing is abundantly clear: “There’s no shortage of books about writing. There are always new titles.”

Jen’s Tiger Writing, for one.

Early last fall, Jen took a moment from teaching and judging the National Book Award to reflect on the ever-expanding library of books about writing.

“I mostly cut my teeth on the old standbys,” she began. “Henry James’ prefaces, E.M. Forster’s Aspects of the Novel and Janet Burroway’s Writing Fiction. All of these I still recommend and teach, though I can see today that they uphold a certain set of literary values that come out of the Enlightenment – that assume art is for art’s sake, for example, and that individuality is of the utmost importance.”

It was in the early 1980s, while studying for her MFA at the University of Iowa, Jen says, that she first discovered books about writing that countered that view. John Gardner’s On Moral Fiction, Milan Kundera’s The Art of the Novel and Flannery O’Connor’s Mystery and Manners all “dared to suggest that the individual might or might not make his or her world, that what he or she chooses might or might not therefore be the right focus of fiction, and that fiction might actually sometimes serve a purpose.”

Today, Jen reads and teaches books about writing that represent both views. “I do devour James Wood,” she says, “and am always greatly edified by his views.” She also picks up books such as: William Flesch’s Comeuppance, F.C. Bartlett’s Remembering, Lawrence Levine’s Highbrow/Lowbrow: The Emerging of Culture Hierarchy in America and Toni Morrison’s Playing in the Dark: Whiteness and the Literary Imagination.

When asked about books or essays treating craft questions arising in his classes at Southern Methodist University in Dallas, Texas, and at Kimbilio, David Haynes pauses. Then says: “I should probably write them.” He talks about his work with an emerging journal to do just that “over the next couple of years.” Meanwhile, of the inaugural retreat, he says, “[T]he evidence presented to me was 20 accomplished, emerging African American fiction writers weeping at having available what has never been available in a degree program anywhere: high level, serious-minded, craft-focused attention on their work, including the elements that might be culturally specific.”

In Austin, where she is a professor of English at the University of Texas, Deborah Paredez, the poet and founder of CantoMundo, a workshop dedicated to cultivating a community of Latina/o poets, teaches books that offer technical advice and exercises, to help students “break the overwhelming into the manageable”: Mary Oliver’s A Poetry Handbook, Ted Kooser’s The Poetry Manual, Robin Behn’s The Practice of Poetry. Paredez also recommends books that discuss questions of context, books such as June Jordan’s Poetry of the People, Elizabeth Alexander’s The Black Interior, Gloria Andaluz’s Borderlands/La Frontera: The New Mestiza, Jen’s Tiger Writing. “It’s a good time for writers to expand the definition of what a craft book is,” Paredez says.

T.F. Charlton, a writer on race, gender and sexuality, echoes Paredez, and also questions the judgment and reliability of craft advice from writers who engage only with the traditional “Western canon.” “I recently picked up my husband’s copy of a book about writing by a well-known author,” she says. “I could find only four authors of color on the ‘Read Immediately’ list, out of dozens – and all four were men.”

What kind of reader or writer, Charlton asks, could that author teach her to be?

Of course, there are as many ideas about what constitutes quality craft advice as there are writers. As author Louis Menand once wrote, “What counted as craft for James … was very different from what counted as craft for Hemingway.” Says Elmaz Abinader, poet, performer, novelist, and co-founder (with Junot Díaz, Victor Díaz and Diem Jones) of VONA/Voices, a multi-genre retreat for writers of color, “The craft book is a curious thing. Books about writing provide a common vocabulary for writers, yet we spend a lifetime enchanted by and engaged in literature that breaks the rules.” What books does she teach? bell hooks’ Writing Beyond Race: Living Theory and Practice and her remembered rapture: the writer at work; the anthologies Colors of Nature, edited by Alison Hawthorne Deming and Lauret Savoy, Homelands: Women’s Journeys Across Race, Place and Time, edited by Patricia Justine Tumang and Jenesha de Rivera and Waking Up American: Coming of Age Biculturally, edited by Angela Jane Fountas.

For poet and professor Oliver de la Paz, who sits on the board of AWP and co-chairs the board of Kundiman, an organization dedicated to the creation and cultivation of Asian American poetry, one book on craft has been and remains indispensable. That guide is Black Lightning: Poetry in Progress, edited by Eileen Tabios. “It talks about edits and revision on the line level,” he says, “but also the psychology of decisions made in editing that are specific to Asian American writers. It’s a fascinating book.” Then de la Paz considers his students. “I’m interested in helping artists be the artists they want to be,” he says, “on their own terms. Whatever those terms are.”

Catherine Buni is a writer and editor whose work has appeared in The Atlantic online and The New York Times.

Books about writing cited and recommended

For more book recommendations, check out our four books every writer should read.