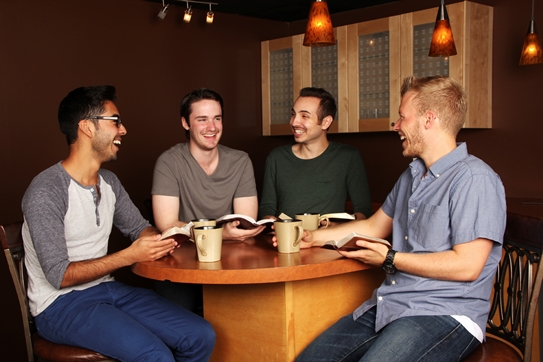 Every page was a struggle. Not since grad school had I endured such an awful book. Paragraph after paragraph of inept dialogue and improbable plot slogged toward an unsatisfying end. In truth, I would have chucked it long ago if only it hadn’t been this month’s selection by the Men’s Only Book Club.

I’ve been a MOBC regular for five years. Fellow members include doctors, lawyers, judges, professors, civil servants, scientists, urban planners, engineers, businessmen and one full-time writer: me. We writers, of course, are scrutinized, analyzed and even demonized by book clubs; folks generally don’t get together to critique professors, planners or physicians. Why, then, would anyone want one of us in their club? And why would we want to be one of them?

The MOBC dates back to the 1980s. The wives of two then-young professors were each members of all-female book clubs. After attending one of the meetings, the pair of profs recruited a few neighborhood friends – all male – and the club was born.

As the neighborhood changed, MOBC membership evolved. Books by local authors were a favorite; distinguished writers accepted invitations to chat in person about their craft: Erik Larson (Devil in the White City), Tim Egan (The Worst Hard Time), Jim Lynch (Truth Like the Sun). After reading Jamie Ford’s Hotel on the Corner of Bitter and Sweet, the club ate dinner at the actual Seattle hotel where fictional events were based. Rebecca Skloot’s The Immortal Life of Henrietta Lacks inspired an invitation to University of Washington scientists whose research relies heavily on Henrietta Lacks’ infamous cells.

In 2009, the club read my book, On American Soil, and asked me to join their discussion. Afterward, I was invited to become a full-fledged MOBC member. Like many writers, I’m not much of a joiner. But Leslie, my wife, had been campaigning to get me out of the house and thought occasional nights talking books with other guys might float my boat. Not for the first time, my wife was right.

The MOBC gathers every six weeks or so, always on a Monday, always at 8 p.m. After 10 minutes catching up over drinks and snacks, we shoehorn into one of our members’ modest Seattle living rooms. We offer opinions about the latest selection; spirited discussions sometimes push past 10 p.m. “It’s an eclectic group,” says Ted Klastorin, the club’s longtime chairman. “They’re people who are interested in ideas.”

Interested in ideas. As a writer, I had assumed – worried, even – that book club critiques would focus mainly on authors’ storytelling talents, or lack thereof. But at MOBC, topic trumps technique. If a book’s backdrop is war, we worry little about plot and pacing, focusing more on history’s how and why. When Sherman Alexie writes about life on the rez, we talk mostly about the rez, not Alexie’s brilliant way with words. We rarely parse sentence structure or deconstruct dialog. All those details that bedevil writers dissolve amid dissections of broader topics.

This, I confess, has been a real eye-opener. With few exceptions, MOBC selections serve primarily as catalysts for conversation. We might grouse about turgid prose or improbable plot, but only for a moment. Rather quickly, we transition to the author’s chosen subject, sharing our own experiences and perspectives. We often stray far from the actual storyline, paying scant attention to the author’s style.

The liveliest sessions emerge from books that surprise us, those that challenge conventional wisdom, uncover hidden gems or reveal unexpected truths. If real estate is all about location, location, location, then writing is surely mostly about story, story, story. At the MOBC, that’s true even if the execution is a little flawed. As long as the author provides a spark, we readers are eager to stoke the fire.

Left to my own devices, I still abandon bad books as early as I can. But being in a book club forces me to push past my usual aversion to rotten dialogue and unsympathetic characters. Some topics, I now realize, are so compelling that even lousy writing can attract a big audience (50 Shades of Gray, anyone?) My MOBC membership has taught me to pay more attention to subject matter, even as I struggle daily to improve my writing. To be great, you’ve got to do both.

Jack Hamann is the author of On American Soil: How Justice Became a Casualty of World War II. Hamann and his wife, Leslie, are working on a book about a groundbreaking cross-country journey.

How does your book club make its selections? The Men’s Only Book Club uses something called approval voting. Each meeting, a designated member brings a list of a half-dozen or so intriguing titles. After discussion, votes are cast one book at a time. Under approval voting, each member can cast a vote for as many books as appeals to him: one, all, or somewhere in between. The book with the most votes wins. University of Washington professor Ted Klastorin, an operations management expert at the Foster School of Business, says, “Research shows that voting is more accurate when you have multiple choices. It’s the same system the United Nations uses when choosing its secretary general. We use approval voting, because that’s the only fair way to vote.”