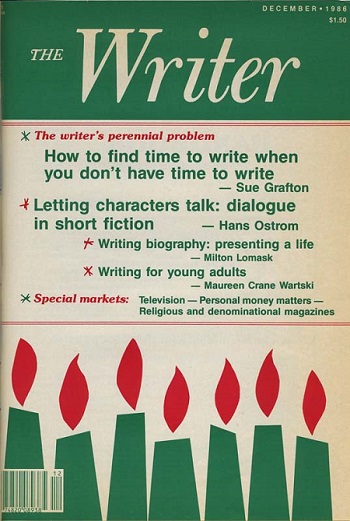 Scheduling time to write is always a challenge, especially amid holiday bustle. Sue Grafton, author of the best-selling “alphabet” mystery series, is no stranger to the struggle; she wrote her first three novels while raising a family and working a full-time job. Although those three manuscripts were never published, they gave her the essential practice she needed to write her fourth book, which launched her career as a full-time writer.

In 1986, when her article ran in The Writer, Grafton had published the third book in the series, C Is for Corpse. Nearly 30 years later, the series is winding down with W Is for Wasted, which hit bookstores this year. Although she has cultivated a full-time career as a writer, Grafton maintains good writing practices and techniques, even amid daily commitments and unexpected crises. She says the first step is to  incorporate writing into the daily routine.

“The problem is that we view writing as a luxury, something special to allow ourselves as soon as we’ve taken care of the countless nagging duties that seem to come first,” she says. But: “Once you put writing first, the rest of your life will fall into place.”

Grafton suggests committing one or two hours each day to writing. This time should include not only composition but also planning, research, outlining, marketing, querying and follow-ups. These “clerical details” can be completed at odd moments throughout the day, between commitments or on the go.

“Having several projects in the works simultaneously is good for you psychologically,” she says. “If you get stuck on one, you can try the next.”

Still need more time? Try one of these strategies:

Break your projects into small, manageable units. Assign yourself a quota such as two pages a day, and approach the writing time with persistence, a “steady hammering away at the writing from day to day, day after day,” to produce a consistent quantity of work. Grafton also suggests beginning each morning with a brief meditation: Spend five minutes visualizing yourself in a productive, energetic, enthusiastic writing session.

“Use these positive messages to block out your anxieties, the self-doubt, the fear of failure that in fact comprise procrastination,” she says. “Five minutes of quiet will reinforce your new determination and will help you make the dream of writing real.”

Hillary Casavant is a writer in the Boston area.

This article originally appeared in the December 2014 issue of The Writer.