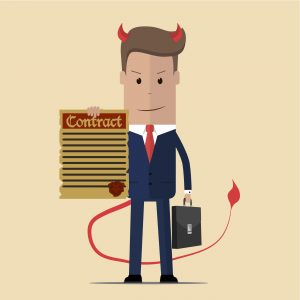 I get being hungry for work – remember it well. One paid gig and – voila! – you’re a professional writer, you’re on your way! But some jobs bring no glory; they bring only the sinking realization that you’ve contributed to moral decay (OK, they might also bring a little money). Among many other things that the internet unleashed (and, yes, I know it brought good things, too, including this article idea) is a spate of such jobs, making their siren calls as we wait for good news from a publisher.

Perhaps you’ve been scanning the opportunities on various job boards. You see ads for academic writers, companies eager to hire writers – many, in fact – or maybe you see ads that appear to be from individuals looking for research and/or writing assistance. “Great!” you think. You did plenty of academic writing successfully in college and would enjoy learning new things and having varied challenges – a-hem, varied paid challenges. As for being a research assistant, for a professor, you imagine, that would be a perfect writer’s side gig.

But just who or what is behind those ads?

Avoiding the temptation to write for essay mills

Years ago, prior to beginning my stint as a college lecturer, I responded to such an ad with these thoughts in mind, set up an interview, and followed the employer’s directions – right to a student dormitory! (When it finally became clear that he hoped I would finish his senior research paper for him, I skedaddled on home.) Professors draw from their own students for research assistants; they’re unlikely to run ads for complete unknowns. And the companies trolling for writers? Many exist to supply the cheating ambitions of students; in other words, they’re essay mills.

Try typing in “help writing college essays,” and you’ll find them lurking among the legitimate advice offerings and in the surrounding ads. For a fee, some anonymous co-conspirator will take students’ research or class notes and forge them into essays following professors’ specifications. Or, for more money, the mill writer will tackle the research, too. The sources? One anonymous “academic ghostwriter” admits that he (or she) gets by with the snippets offered by Google Books and Wikipedia, a source often disallowed by professors. “I give the illusion of depth,” the ghost explains, “the impression of analysis.” These ghosts’ object is to get the job done quickly so they can move on to the next bid, making serious research unlikely.

Students in the U.S. and around the world buy college application essays, freshman compositions, bachelor’s and master’s theses, and Ph.D. dissertations – no job too big or small. Some of them, found an English Ph.D. candidate who wrote his dissertation on plagiarism, order essays upon receiving the prof’s assignment – clearly, learning to research effectively, write smoothly, and think deeply about complex issues is not on their agenda. As academic ghostwriter David A. Tomar puts it in his confessional but informative “The Ghostwriting Business,” “most people who don’t write would rather knowingly contract malaria than spend a week working on an essay.” Nor can they be bothered, it seems, to string together passages lifted from the internet. Loathsome as that practice is, at least it represents some effort and research, however scanty. (As an instructor, I would still fail the paper.)

For some students, it’s plain laziness; others resort to the mills because of poor writing skills, whether native speakers or not. When poor writing is the case, one trip to an essay mill may commit them for the duration, for what would the professor conclude when students follow a polished piece with one of their own error-laden efforts? And why would they give up a succession of A’s or B’s? Tomar reveals he has “helped” students by writing their essays over a whole semester.

The irony of the situation is that many of these fabrication factories proudly guarantee students “original, plagiarism-free” products. Students needn’t worry about plagiarism detection programs like Turnitin.com or about the professor recognizing the paper from a previous semester. These companies promise made-to-order, single-use papers that can be accompanied by sources, outlines, and whatever else the professor requires. (Is it wise to trust those who help students cheat not to cheat in turn? I wonder. One company reportedly bribed a student for additional payment to avoid having his name revealed to the college.)

Of course, cheating aside, another problem with this picture is that it privileges the well-heeled, the rich students who can afford to purchase their degrees essay by essay. Poorer cheaters are stuck with the free essay mills, which contain badly written, much-used essays. Let’s not waste too much sympathy on any ilk of cheater, though. Imagine instead that the affluent kids are getting original, quality essays (and even they aren’t always good quality). What does that do to the students – rich, poor, and otherwise – who do their own work? How do their essays look stacked up against those written by professionals, if the cheaters are lucky enough to land professional writers? What does this do to the GPAs and the job competitiveness of the hapless, honest students?

Many companies insist that they offer only offer assistance. Their sites may include information on essay construction and citing sources. They explain that they are providing “models” to show students how to create their own essays. Some even warn students against putting their names on these “models” and pledge fealty to university honor codes. These advice notes and disclaimers exist to hook the unwary student and to clothe the company’s occupation in the gown of legitimacy. Despite one such company’s verbiage about its legitimacy, it sells essays to 20,000 students each year, reports Paul Greatrix, author of “Cheats Shouldn’t Prosper.” Think about it: Why would a student shell out cash for an essay-as-study-guide when the library is full of them? And why do these guides have to be on the students’ assigned topics? I sometimes present model essays to students, but I certainly wouldn’t feed them language that might end up in their papers.

Other essay mills make no effort to disguise their nefarious intent. Take Unemployedprofessors.com, for example (yes, really). “Paper? Or Party? The choice is yours…” the site boldly announces, and “We help you play by making your papers go away.”

It’s hard to imagine why a writer, likely to be irate if someone stole pieces of his or her published creation without attribution, would be willing to help students plagiarize, let alone professors who – we would hope – value education. Perhaps I’m a purist; clearly, I’m out of touch with some contemporary thinking. Unemployed Professors says it hatched when its founder met a teacher who “didn’t care about her students.” (How easily some stumble off the high road!)

Other academic ghostwriters dredge up different rationalizations. Mill writer and one-time professor Jennifer Sunseri confesses that, “As a former professor, this is the equivalent of prostitution for me.” But “[e]thics be damned,” she concludes. “You gotta kind of look after yourself.” Then there are the academic ghosts who dabbled in law-related careers – helping students cheat is, unfortunately, legal (law and ethics apparently being distinct categories). James Robbins, a former lawyer, uses his earnings to work his way through nursing school. He declares, “I’ll take their money. It’s not like they’re going to learn anything anyway.” Meanwhile, Charles Parmenter, once a policeman and a lawyer, is also curiously unbothered by assisting plagiarizers “If anybody wants to say this is unethical – yeah, OK, but I’m not losing any sleep over it.” Yet another mill writer rationalizes that “[m]ost of the people I’ve done it for dropped out after first year.”

But casting off school isn’t routine. Keeping Robbins company in school are plenty of aspiring nurses who have purchased essays – and business majors, teachers, and principals. Our anonymous ghostwriter draws the line at nurses and a few others: “I stay away from applied fields – it is my only ethical standard as a ghostwriter,” he declares. “I will not help a nurse to qualify on false pretenses. Who knows, it might be my parents who find themselves in their care.”

To be clear, ghostwriting in general is an honorable occupation; aside from this newer version of enabling cheaters, there’s nothing wrong with taking on a writing job that will not feature your name. Opportunities for legitimate ghostwriting are numerous and varied. Celebrities, as well as the common person, hire ghosts to write their stories. Businesses hire ghostwriters to produce company documents. Political figures hire speechwriters – but in each of these cases, the writers go into these arrangements clear-eyed. No one is hurt. However, within the academic subset of ghostwriting, a student’s education and their opportunity to develop ethical sensibilities are hurt, their classmates are hurt by being placed in a mismatched pool of writers, and employers are eventually hurt by employees who simply aren’t as good as they look on paper. And, ultimately, we all are hurt.

Many of these people work their way into high places in our increasingly duplicitous world. And then what? Most fields are, in one sense or another, applied fields. They will be working for us, peopling the jobs that surround and serve us. Take on a writing job that enables cheaters, and you have only yourself to blame if your doctor, lawyer, or financial advisor is an under-educated boob who bought his or her degrees.

In his essay “Bringing Down the Fire,” David Bradley calls writing “his religion,” explaining that we – writers and readers – come to a written work hoping “that we’ll be touched by something, that we will feel a connection with some source of power and energy and understanding.” Creating work that will do that for readers, that will “bring down a little fire to change [his] readers and change” himself is Bradley’s ultimate aim.

We have such an opportunity not only to entertain but to inform, encourage, uplift, and inspire. Why squander it?

Gail Radley is the author of 24 books for young people and numerous articles for adults.