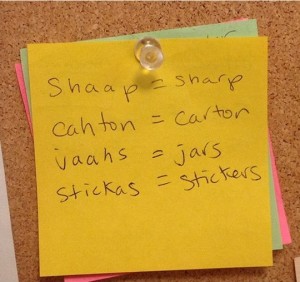 Colloquialisms and accents are rich in potential for creating lively dialogue and giving your characters a distinct trait. Consider distinguishing one of your characters with such a quality and mine the language for quintessential expressions and nuances.

For examples, think The Great Gatsby and The Brief Wondrous Life of Oscar Wao. F. Scott Fitzgerald’s repetitive use of “Old sport” in building Gatsby’s dialogue created an unforgettable sound bite while setting readers right in the middle of the 1920s. Junot Diaz’s bold, unrelenting use of Spanish and Spanglish slang in Brief Wondrous Life gives the novel its distinctive voice and flair – in fact, the fast-paced, slang-filled voice almost becomes a character in its own right.